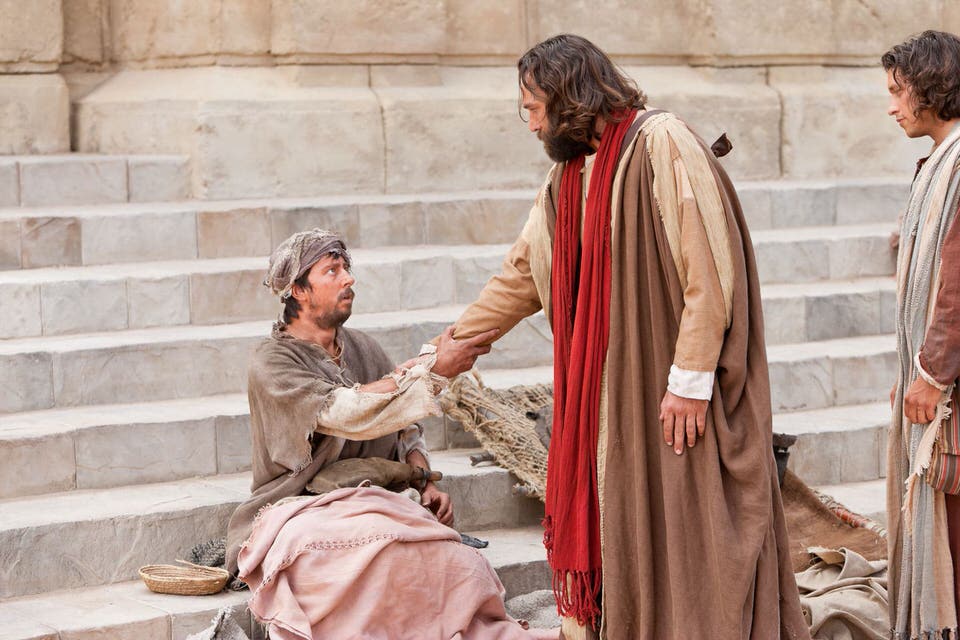 Acts 3:1-10 Peter and John went to the Temple one afternoon to take part in the three o’clock prayer service. As they approached the Temple, a man lame from birth was being carried in. Each day he was put beside the Temple gate, the one called the Beautiful Gate, so he could beg from the people going into the Temple. When he saw Peter and John about to enter, he asked them for some money. Peter and John looked at him intently, and Peter said, “Look at us!” The lame man looked at them eagerly, expecting some money. But Peter said, “I don’t have any silver or gold for you. But I’ll give you what I have. In the name of Jesus Christ the Nazarene,[a] get up and[b] walk! Then Peter took the lame man by the right hand and helped him up. And as he did, the man’s feet and ankles were instantly healed and strengthened. He jumped up, stood on his feet, and began to walk! Then, walking, leaping, and praising God, he went into the Temple with them. All the people saw him walking and heard him praising God. When they realized he was the lame beggar they had seen so often at the Beautiful Gate, they were absolutely astounded!

In story of the lame beggar, we see the two kinds of lives. One is that of the lame beggar. A life of no hope, no healing, being carried daily to the temple by some friends, settling for a few coins to feed him for the day. He has been living like that since birth. The second one is that of Peter and John. A life led by the Spirit and full of hope. They did not live for money but lived by faith in the name of Jesus. These two lives clashed at the gate of the temple called Beautiful. The lame beggar asked for money but the apostles gave them more than that. Peter later spoke and said that it was by faith in Jesus’ name that the man was healed.

How do you live your life? Are you spiritually lame, driven by the world to the house of God but not receiving what you really need but expecting God to only provide finance to help you through the day? Or are you led by the spirit into a faith-filled miraculous life? Here’s what will change your life. Jesus commanded his disciples to wait in Jerusalem until they were baptized by the Spirit as was promised and then they will be his witnesses around the world. Holy Spirit baptism can turn your life around just as he did for the apostles. 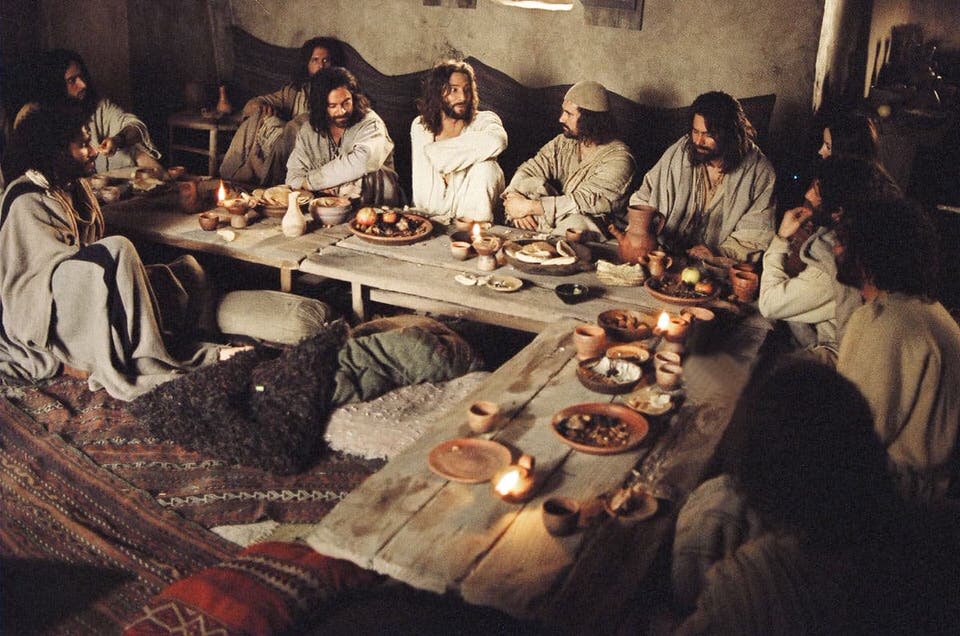 Luke 22:7-13 Then came the day of Unleavened Bread, on which the Passover lamb had to be sacrificed. So Jesus sent Peter and John, saying, “Go and prepare the Passover for us, that we may eat it.” They said to him, “Where will you have us prepare it?” He said to them, “Behold, when you have entered the city, a man carrying a jar of water will meet you. Follow him into the house that he enters and tell the master of the house, ‘The Teacher says to you, Where is the guest room, where I may eat the Passover with my disciples?’ And he will show you a large upper room furnished; prepare it there.” And they went and found it just as he had told them, and they prepared the Passover.

Jesus asked the disciples to prepare the Passover meal. He did not tell them, where and how to do it. So they asked him and he gave them the instructions. If we were to get these instructions, it would still be vague for us to follow them but that’s how God works. He gives us the immediate plan and still leaves in enough room for us to exercise our faith in him. The disciple went ahead and did according to the instructions and they prepared the Passover meal just as Jesus wanted. Luke 22:14-20 And when the hour came, he reclined at table, and the apostles with him. And he said to them, “I have earnestly desired to eat this Passover with you before I suffer. For I tell you I will not eat it until it is fulfilled in the kingdom of God.” And he took a cup, and when he had given thanks he said, “Take this, and divide it among yourselves. For I tell you that from now on I will not drink of the fruit of the vine until the kingdom of God comes.” And he took bread, and when he had given thanks, he broke it and gave it to them, saying, “This is my body, which is given for you. Do this in remembrance of me.” And likewise the cup after they had eaten, saying, “This cup that is poured out for you is the new covenant in my blood.

We read here that Jesus although he was the one who arranged for the Passover meal, he did not participate in the meal rather he led them into it. He desired to eat with his disciples but he waited till after his suffering on the cross. Why did he do that? This is what I think. When a man is sentenced to death, the modern justice system allows the man to have his last meal, one that he desires to enjoy before everything ends for him. In the case of our Lord, the death he was to endure was not the end but the beginning. The bible says that he endured the cross for the joy that was set before him. It wasn’t the meal that brought him happiness, it was our salvation that kept him going. He now wishes to dine with us as we celebrate his victory on the cross. Don’t we serve an awesome God? 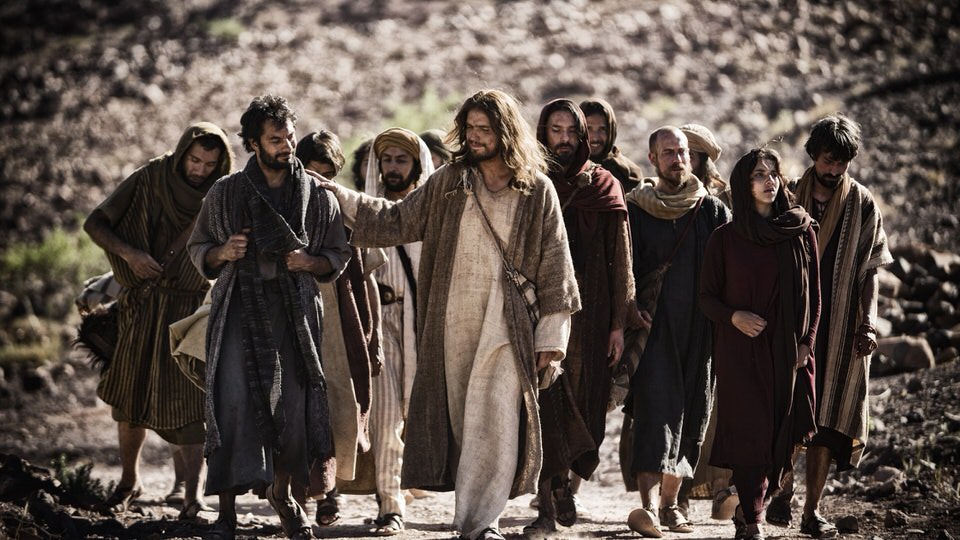 From the beginning of Gospel of Mark, people around Jesus were in awe of his preaching. They realized that Jesus was different from the others because he spoke with authority (Mark 1:22). John the Baptist introduces the Savior as the one who is mightier than him (Mark 1:7). Yet there were those who questioned his authority and saw him as an ordinary teacher like John the Baptist and the Pharisees. So they asked Jesus the below questions from Mark 2:18,19.

I believe Jesus knew their hearts and answered them that he is not to be compared to the others. He is God himself who has come like a bridegroom. He had pictured himself as the husband of his people Israel (Isaiah 62:4; Jeremiah 2:2; 3:20; Ezekiel 16:8; Hosea 2:19) and now the word of God has become flesh so that he can be with his people. Fasting was a time when the children of God mourned and prayed for a God encounter. Since Jesus is now with them, their mourning has turned to dancing. The Lord compares this situation to stitching a new garment into an old garment and storing new wine in an old wine skin. They are both very different and are not to be mixed. 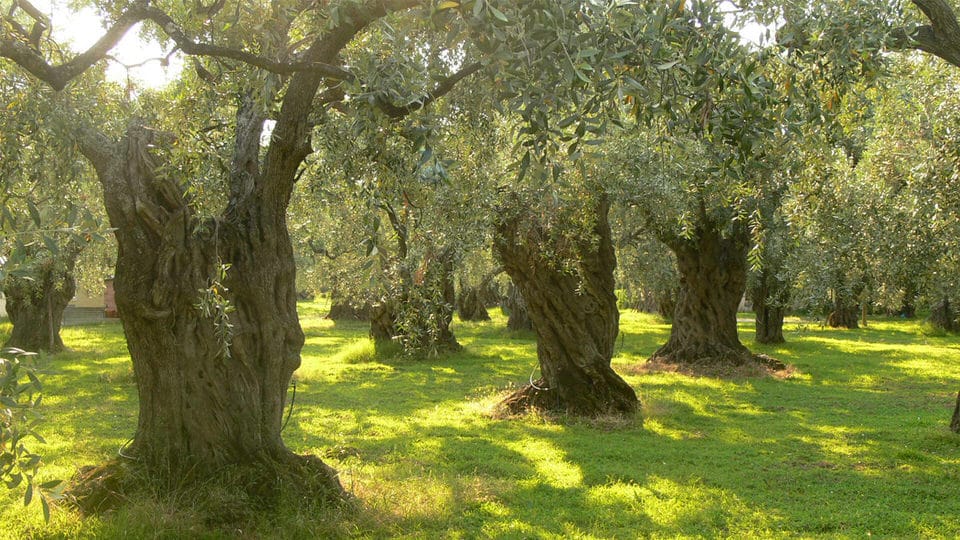 Olive tree is biblically very significant. Olive oil represents anointing, healing, joy, and light, its leaves symbolizes peace which is still used in the emblem of the State of Israel, its branches represent beauty, its trunk is said to be strong and capable of regeneration in case of it being cut down or burnt, it is ever green and bearing fruits through centuries. Olive oil has been used extensively in Biblical sacrifices and to anoint some of the greatest kings.

To be an olive tree flourishing in the house of God means to be an anointed, shining, peaceful, beautiful, strong and ever fruitful child of God in an environment of constant prayer. Just like in the physical, we may have to go under the oil press of beating and crushing to produce good oil. Just have patience and submit to God praying constantly that he changes us to become like an olive tree in the house of God. God bless you. 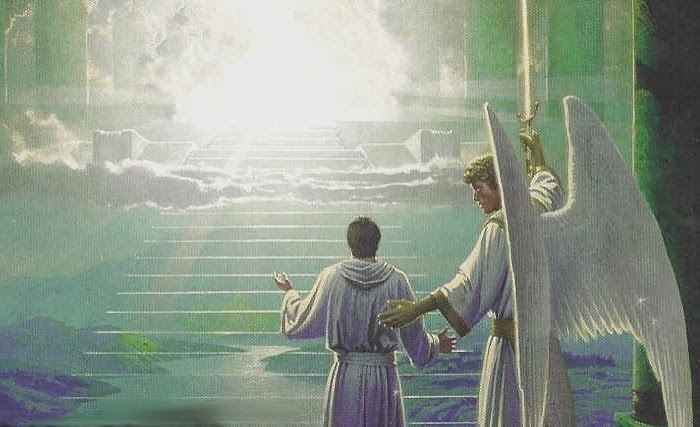 King David said “One thing I ask of the Lord, this is what I seek; that I may dwell in the house of the Lord all the days of my life, to gaze upon the beauty of the Lord and to seek him in his temple” (Psalm 27:4). The New Living Translation reads, it is the thing that David seeks the most. King David is a man of prayer. He cries to God when he needs help and praises God when he receives the answer. And if there is one thing that he seeks most, more than anything else in the world, it is to be in the house of God constantly gazing upon the beauty of the almighty. He loves to admire his heavenly father in an environment of prayer.

In the new testament, our Lord Jesus makes clear to us what the house of the Lord is. In Matthew 21:13 he says, “My house will be called a house of prayer”. I truly believe that both our Lord Jesus and King David were referring to the same house which in modern english should mean an environment where we continually come to God in prayer. Literally it could be a prayer room or your car or any place you almost frequently come in contact with the Lord. This is where we are able to seek his presence and admire his glory just as David did. Do you agree with me? If you have another revelation to share, please comment below. Thanks for reading.

Craving the Sweet Word of God

King David used to spend his nights crying out to God for forgiveness and for help. In Psalm 6:6 he says “I am worn out from groaning; all night long I flood my bed with weeping and drench my couch with tears”. That was his style of prayer as a King. As children of God, we are not even close to that level of prayer. David believed that it was God who sustained him through the night and kept him safe from his enemies. At that time, his life was in real danger. In Psalm 3:5, he says “I lie down and sleep; I wake again, because the LORD sustains me” and in Psalm 4:8, he says “In peace I will lie down and sleep, for you alone, LORD, make me dwell in safety”. His prayer in the night and his trust in God to protect him, gave him the peace that enabled him to sleep and wake up praising God in the morning. Prayer in our lives should not end at night. If we are distressed and we need help, we must spend our nights crying out to God till we are at peace. If there’s more you want to add about praying in the night, please comment below. The comments I receive here encourage me a lot. Thanks.